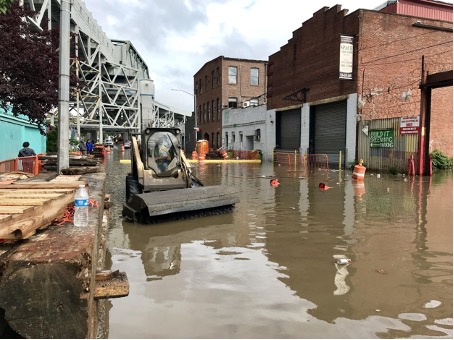 The Floodsense Project was named the MetroLab Innovation of the Month, which highlights impactful tech, data and innovation projects underway between cities and universities. Congratulations! (via Government Technology).

Work in New York City collects systematic data on street-level flooding, partnering with local agencies to design real-time flood sensors and an open code that other cities can build on.

In this month’s installment of the Innovation of the Month series, we highlight a project called FloodNet.nyc: Street-level Flood Sensing and Data Sharing for Urban Resilience. As high tides and high-intensity rainstorms are projected to occur more frequently due to climate change, this team aims to monitor and record frequent, hyperlocal street-level floods in New York City. MetroLab’s Ben Levine spoke with Andrea Silverman, Brett Branco, Charlie Mydlarz, Elizabeth Henaff, Ricardo Toledo-Crow and Tega Brain about their project.

Ben Levine: What was the origin of this project and who has been involved in it?

Elizabeth Henaff: The project began as two separate initiatives, one at New York University (NYU) and one as a partnership between the Science and Resilience Institute at Jamaica Bay (SRIJB) and the Advanced Science Research Center (ASRC) at the City University of New York (CUNY). The NYU team has been studying the impact of contaminants in sewage-influenced flood water, and we realized that we needed data to understand when floods happened, so that we would know when to sample. When we looked around for flood data, we realized that there is little to no systematic data on hyperlocal floods available, not only in New York City, but in other cities as well. This motivated us to start designing flood depth sensors, as part of a project that we originally called FloodSense.

Brett Branco: Meanwhile, SRIJB had been hosting the Community Flood Watch program in neighborhoods around Jamaica Bay. The program documents floods as reported by the residents through photographs and descriptions. These reports chronicle high-tide floods — an indication of the effects of sea level rise — and are used to support forecasting models and assist city services. We started our flood sensor project to complement the Flood Watch reports by continuously measuring and recording the floods and water levels, at near real time, and at the locations where frequent flooding occurs.

Andrea Silverman: Both projects were proceeding concurrently, in different neighborhoods of New York City. Both project teams had been in communication with the NYC Mayor’s Office of Resiliency and Mayor’s Office of the Chief Technology Officer, who suggested we meet to discuss our ideas and goals. We promptly started collaborating on sensor development and data management, and now we share the underlying technology, have merged data streams, and call the project the FloodNet Consortium.

Levine: What is the current state of flood data and citizen access to it in New York City?

Tega Brain: Much of the existing formal flood data focuses on catastrophic events like hurricanes. But non-catastrophic floods that occur at a more local level — including “sunny day,” tide-related nuisance floods and floods related to inundated sewer systems — had only been recorded through community reports to the Community Flood Watch program and New York City’s 311 service request portal. For example, 311 is the main recourse available to NYC residents to report flooding events, and there are thousands of street-level flood complaints reported to 311 each year. This data is publicly accessible, but does not include important information like flood depth, and flood location is not always accurately reported.

Silverman: Additionally, the community reports are not systematically collected. Community members may not report floods every time they occur, for example if the event happens in a location and at a time when no one is present to observe it. Or if a flood occurs at a particular location regularly, there may be reporting fatigue. There are some systematic data sets collected by NOAA and USGS tide and stream flow gauges placed in the waterways surrounding the city. However, there are only a few sensors deployed, so the data collected does not necessarily reflect actual flooding on streets. Therefore, the goal of our project is to make the first systematic, continuous and accessible record of regular and catastrophic street-level flood events in the city.

Levine: How will your project improve the collection of flood data?

Charlie Mydlarz: Since the beginning of the sensor design process, the team has consulted with city agencies and community partners to understand sensor use cases, design needs and deployment locations, which has informed all aspects of the program. As a result, we designed real-time flood sensors that are small, low cost, easy to install, powered with solar cells and utilize simple data transmission. We made sure they are easy to construct with an open-source design to encourage community participation in their construction and deployment. Their low cost enables us to deploy a larger network of sensors with finer spatial resolution, to record flood events that are more local. We use a novel telemetry network (LoRaWAN through “The Things Network”) to transmit the data, which we are in the process of setting up as the basis for a broader, low-cost open communications network that the city can use for additional projects using low-cost sensors.

Ricardo Toledo-Crow: We were given permission to deploy the sensors on street infrastructure by the NYC Department of Transportation and Verizon, and have so far installed eight sensors to test different designs and monitor performance. Pilot sensors have been installed in the Gowanus neighborhood in Brooklyn, which experiences floods from the overflow of inundated storm water sewers, and in Hamilton Beach on Jamaica Bay, which suffers from tidal floods. The sensors were able to detect and report street-level floods with a high degree of accuracy within the first month of deployment.

Levine: How will this be used by the city in their preparation for and response to flooding, and how will citizens engage with it?

Brain: We are currently working in close partnership with community groups and city agencies to develop an online portal for the sensor data that can be used by a range of stakeholders to access flood data in a meaningful and usable way. Our goal is to make the data immediately available to users with a simple access interface to encourage interested parties to view the data and participate in the project. These users include residents who may want to keep track of flooding, city agencies that need up-to-the-minute information about flooded streets, and academics studying sea level rise or the impact of contaminated flood waters.

Henaff: The data portal is a work in progress, but so far there have been a number of stated interests for the data. For example, our community partners who live in flood-proned areas already have a deep understanding of the locations and frequency of flood events, but have stated a need for more systematic data from sensors that monitor flood levels continuously to facilitate advocacy work and data-driven discussions with policymakers around solutions to address flooding in their neighborhoods. There is also interest in a centralized resource for day-to-day decision-making about living with water, like when to move your car from one block to the next to avoid being impacted by rising waters.

Silverman: We meet with our partners from the city on a weekly basis. In addition to a desire to use sensor data to confirm community reports of flood events, our city agency partners have described an interest in using the sensors to collect data for resiliency and transportation planning to validate complex hydrological models developed for future flood predictions, and to provide hyperlocal data that could be used to activate the city’s emergency response center in a more local and targeted manner. City agencies also view these data as a novel baseline data set to monitor changes in flood extent and patterns into the future.

Henaff: Ultimately, we are very interested in seeing how the flood sensor data is actually used; it’s one thing to collect the data, but the true assessment of the project’s impact will be whether it’s used, how and by whom. This will help us iterate the design and deployment strategies to improve useability, and also understand who to work with down the line for action toward resiliency, whether that be emergency response, policy change, improved forecasting, zoning or infrastructure upgrades, or something else. It’s an important open question, and one we will continue to assess.

Levine: Could this be applied on a larger scale, either in more cities or at the state level? Where do you see the project going from here?

Toledo-Crow: Many communities around the world are struggling with street-level flooding, and some have implemented community or sensor-based flood monitoring, including the CoastSmart Communities program in Annapolis, Md., and the Smart Sea Level Sensors project in Chatham County, Ga., to name a few. We imagine that our sensors will have applicability to these communities as they strive to collect more data on urban flood impacts.

Mydlarz: Our project is still in a pilot phase, but we have been intentional in the way we have been documenting the project to make it accessible for others to use. All the designs and code are open source and available on github; we welcome others to use these as-is or build off of them. One thing we have noticed is that the characteristics of a particular urban landscape or flood typology can dictate sensor design constraints, such as mounting strategies, sensor choice and power options. So we imagine that while this research is translatable to other cities and communities, they might have constraints and design specifications that are different from ours. Nonetheless, we have tried to make these devices as transferable and scalable as possible, for example by implementing solar power so that they are not dependent on a grid.

Branco: Ultimately, flooding is a complex problem at the intersection of climate science, city planning, environmental engineering and social equity. We imagine that this sensor project will play a key role in what will have to be an ecosystem of systems that address this issue from all the above perspectives, and that this data will be most successful when integrated with other flood monitoring programs, policymaking and community engagement.