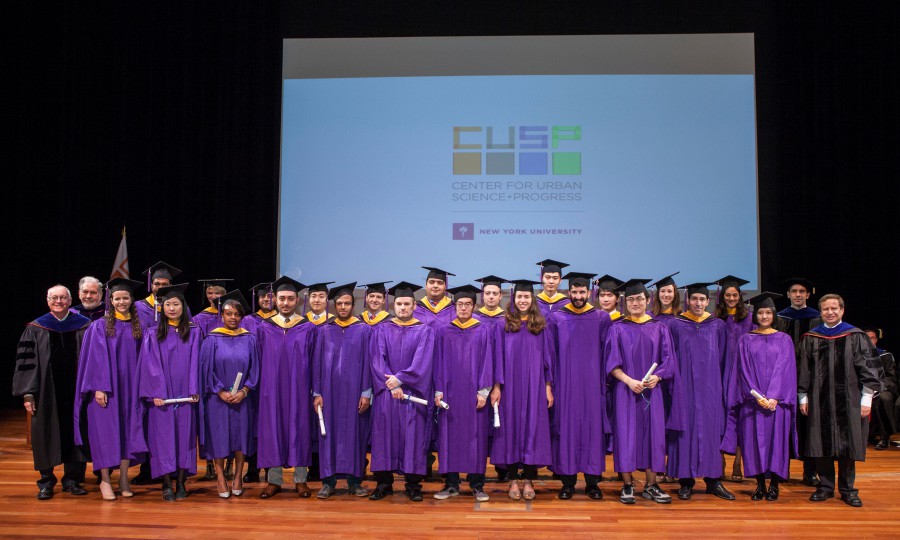 The CUSP program, created as part of the City of New York’s Applied Sciences NYC initiative, is graduating a class of 23 students who have successfully completed a Master of Science program in Applied Urban Science and Informatics. These graduates will now transition into various careers where they will use their education to analyze large-scale data, from a variety of sources, in an effort to understand and address real-world challenges in the urban context, while critically transforming the City’s capacity for applied sciences and engineering and increasing its global competitiveness.

“We are very proud to celebrate the graduation of our first class of students,” said CUSP Director Steve Koonin. “These graduates will move on to work for private technology firms, public sector agencies, and in entrepreneurship and new venture creation. We truly believe that the education they have received at CUSP, combined with their desire to have an impact on the cities in which they live, will enable them to thrive as urban scientists who will help cities around the world become more productive, livable, equitable, and resilient.”

“On behalf of Mayor de Blasio and the City of New York, I commend the graduates of the inaugural CUSP class and the many academic and private sector technology partners who have built this extraordinary program,” said Kyle Kimball, President of the New York City Economic Development Corporation. “This commencement follows through on the promise of the City’s Applied Sciences initiative to create a new cohort of homegrown talent dedicated to tackling the prominent urban challenges of our time, while powering and diversifying the City’s economy. Today’s graduates have already helped cement New York City as a global center of commerce and culture by using our streets as a living laboratory and, as they create new companies and hire New Yorkers to staff them, the great work being done here will create meaningful, lasting economic opportunity across the City.”

CUSP’s inaugural class entered the program with degrees from 24 universities around the world and came with training in more than 20 different academic disciplines – some from the core disciplines like Mathematics, Civil Engineering, Computer Engineering and Physics; others with strong preparation in the social sciences such as Sociology, Political Science, and Urban Studies & Planning.

During CUSP’s intensive, one-year, three-semester M.S. program, students study courses in the science of cities, urban informatics, and information and communication technology in cities. They selected from multiple policy domains to gain breadth and depth in the application of big data analytics to urban problems.  The program also contains a focus on entrepreneurship and innovation leadership, and students are given the option to study technology entrepreneurship or “change leadership” in an existing organization.  The core of the one-year curriculum is a two-semester project – the Urban Science Intensive – during which students, working closely with mentors from CUSP’s Industrial and National Laboratory partners, apply the principles of informatics to address an actual urban problem with a New York City agency to have a direct and meaningful impact on the quality of life in cities.

CUSP was designated in 2012 as part of the City’s groundbreaking Applied Sciences NYC initiative, which was created by NYCEDC to expand the City’s top-tier applied sciences and engineering campuses to help spur economic growth and increase the city’s global competitiveness. The initiative offered to provide City-owned land and seed investments of City capital to universities interested in establishing or expanding applied sciences and engineering programs in New York City. CUSP is currently operating at 1 Metrotech Center in Downtown Brooklyn while its permanent home at 370 Jay Street, formerly occupied by the MTA and NYPD, is developed. CUSP’s presence in Downtown Brooklyn was critical to establishing the area as one of the City’s foremost tech hubs.

Collectively, CUSP, along with the Cornell-Tech, Columbia and Carnegie Mellon Applied Sciences projects, are expected to generate more than $33.2 billion in nominal economic activity, over 48,000 permanent and construction jobs, and approximately 1,000 spin-off companies by 2046, fulfilling the initiative’s goal of dramatically transforming the City’s economy for the 21st century.

When all four Applied Sciences NYC projects are fully underway, the number of full-time, graduate engineering students enrolled in New York City Master’s and Ph.D. programs will more than double, ensuring the strength of New York City’s position in a global economy driven by technological fluency and innovation. Using New York City as its laboratory and classroom, CUSP has set out to respond to the City’s challenge by setting the research agenda for “the science of cities,” and educating the next generation of engineers in how to apply this research, bring innovative ideas to a world market, and create a new, fast-growing and indispensable industry.

In its first academic year, CUSP has continued to set the standard for Big Data institutions across the globe. Thus far, the Center has experienced tremendous success, including:

Looking to the future, CUSP has nearly completed its selection of graduate students for the Class of 2015, a class that is anticipated to be nearly triple the size of the Class of 2014. NYU also has unveiled its plans to turn the long-dormant 370 Jay Street in Downtown Brooklyn into a modern, sustainable academic center that will serve as the future home of CUSP.

For more information on CUSP, its programs and initiatives, please visit the Center’s website, www.cusp.nyu.edu.

New York City Economic Development Corporation is the City’s primary vehicle for promoting economic growth in each of the five boroughs. NYCEDC’s mission is to stimulate growth through expansion and redevelopment programs that encourage investment, generate prosperity and strengthen the City’s competitive position. NYCEDC serves as an advocate to the business community by building relationships with companies that allow them to take advantage of New York City’s many opportunities. Find us on Facebook or follow us on Twitter, or visit our blog to learn more about NYCEDC projects and initiatives.