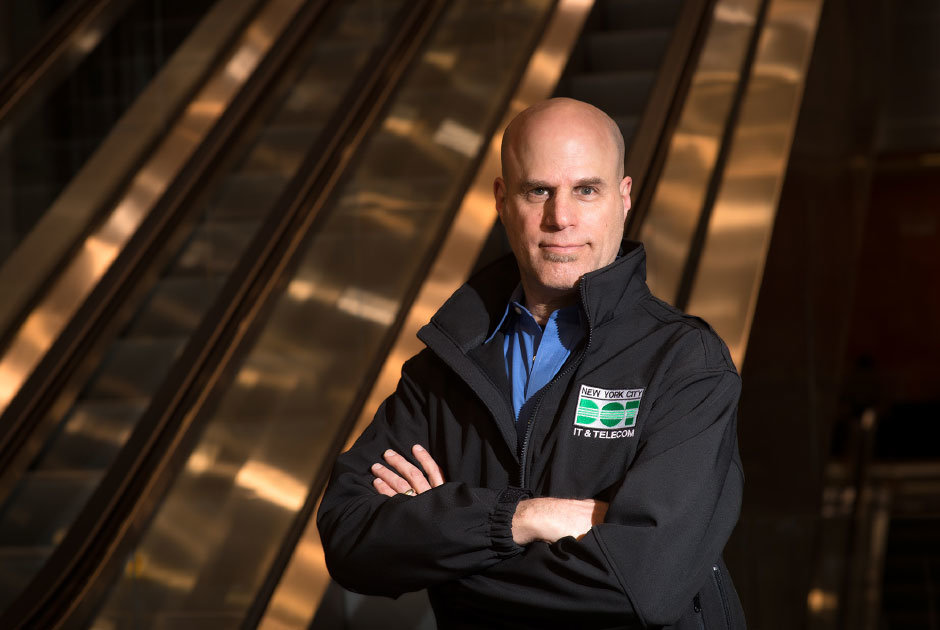 E-bikes, autonomous vehicles, 5G – it all falls on the desk of Cordell Schachter, chief technology officer at the New York City Department of Transportation. It’s a lot of responsibility, but it’s also what keeps him from getting complacent. While most chief technology officers only last a few years in the role – often filtering between the public and private sectors – Schachter has been at the department since June 2008, bucking the trend of high turnover.

As transportation technology rapidly evolves, Schachter is responsible for ensuring that new technologies that involve the department are actually ready for New York City. Schachter spoke to City & State about why New York wants to be the first 5G city, how connected vehicles will make driving safer and why autonomous vehicles won’t likely be seen on city streets anytime soon. This interview has been edited for length and clarity.

You’ve been at the New York City Department of Transportation for a long time – especially for a chief technology officer.

I’ve been here in the longest job I’ve ever held for over 11 years. My previous average tenure was about two years, and the average tenure of a CIO is about two years – for different reasons, usually because something bad happens and the CIO finds himself out of a job. In my case, it’s because I like to do new and interesting things. Since coming to DOT, really in the age of intelligent transportation, my job changes every year. The great thing about being at DOT is we have great collaboration throughout the agency, so we get to work with all of the operations divisions and help them plan their innovations. Everything that you want to do (that is) new is going to be an IT system or have an IT system at its foundation.

The department is still operating its dockless short-term bicycle rental pilot, but it’s only in certain parts of the city, like the Bronx, Staten Island and the Rockaways. Are we going to see an expansion of dockless bikes and what sorts of questions have to be answered before that expansion can happen?

I think it’s really about urban mobility policy; it’s less about the technology. The technology has been proven; it’s used in a wide variety of mobility and micromobility applications. At one point in time, the question was, “Would it work?” We (now) know they work. But how do we integrate – whether it’s dockless bike share or other modes – into the fabric of the city so that it improves conditions, improves mobility, improves safety, as opposed to creating additional risk and jeopardies?

The department is also in the third phase of its connected vehicle pilot. What is the end goal of this program?

The end goal is we’ll have thousands of cars and about 350 intersections equipped with DSRC – dedicated short range communication infrastructure – that enables our infrastructure to talk to the vehicles and tell them about various types of traffic conditions. But it also lets the vehicles talk to each other. So if someone is engaging in emergency braking maneuvers several vehicles ahead of you (and) you may not be able to see those brake lights come on, your car can see it, the technology can tell you so you can begin slowing down. So what we would expect to see at that endgame is vehicles talking to each other, and as a result, being smarter while they’re moving, as well as our infrastructure knowing more about the movements of those vehicles and planning accordingly, and those vehicles getting information from the infrastructure, like, “Hey, you should slow down because that traffic signal is about to change to yellow and red.”

New York’s tech startup sector has grown quite a bit in the past few years. Are you looking at all to them for collaborations or pilots?

Yeah, we have open arms and open ears for new ideas and new perspectives, original perspectives on these things. The challenge for us and for potential partners is (that) we do things at a very large scale, probably the largest scale. So, for example, our connected vehicle pilot, with the thousands of vehicles that we have participating, that’s full production scale in most places. Here, it’s just a test. So if you’re going to engage with us, there has to be a path to doing it at a very large scale. And because the city needs to make these very large investments, there is necessarily a longer period of due diligence in contract negotiation and requirements definition – a longer process with all those things than there would be in other places where you could fail quickly and recover. New York City is a pretty unforgiving environment, you really can’t fail. So if you’re going to abandon something, you really have to abandon it in a pilot or test phase. You can’t have launched something and decide, you know what, this new Coke isn’t selling very well, we’re going to go back to the old Coke.

The department is involved in 5G planning. To what extent are you collaborating with the city Department of Information Technology and Telecommunications?

We closely collaborate with DoITT, with City Hall and with all of the carriers, their intermediaries (and) DoITT’s franchisees, because we want New York City to be the first 5G city. It’s advantageous for us as the government to have this new, faster communications medium available to us. We want it to be a selling point for businesses to stay and move to New York City to operate. And we don’t want them going somewhere else because they can get better 5G somewhere else.

There has been some criticism that New York City isn’t moving fast enough on 5G. Do you believe it will be the first 5G city?

Yeah, I don’t accept the criticism of the city that we’re not moving fast enough. If we only listened to one manufacturer, or really had to, maybe that would be true. But the fact is, it’s a very dynamic environment. We’re trying to satisfy competitors simultaneously, while also trying to achieve this goal of greater access. So it’s not so easy. Not to mention, we’re not doing it for a borough or a portion of a borough that is the size of the city that we’re competing against. We’re doing it throughout New York City, so we can’t rush to a plan that hasn’t been fully thought out, fully vetted, so that in implementation or in use, we realize we went in the wrong direction. So New York City is going to be a lot more analytical at the start to make sure our plans make sense before we commit the entire city to a particular direction for implementing a technology.

What are your thoughts on autonomous vehicle technology? We’ve seen self-driving shuttles on the Brooklyn Navy Yard’s private roads. Is the technology ready for New York City streets at large?

I am not convinced at all that anytime soon these fully autonomous vehicles will be ready for any streets, much less New York City’s. And the application in Brooklyn – it’s not that they were introduced in Brooklyn, they were introduced in a private campus in the Navy Yard, which has only a couple of streets, very easy to control, and does not contain even a small subset of the dynamic traffic conditions that any driver would have to face on the public streets.

What are some of your concerns about how autonomous vehicles would work on public streets?

I’m not going to pretend to be an (autonomous vehicle) expert, but the question I ask when I have the opportunity to talk directly with the manufacturers is for those that say that their vehicles are ready, show me the evidence that convinces you. And not a single one has done that – and not just to me personally, but to New York City DOT or to New York City. So there hasn’t been the right level of information-sharing so that we all can evaluate the same test results and come to similar conclusions about a particular vehicle’s readiness. And we think the wrong place to test an experimental vehicle – because that’s how we view them – is on New York City streets, with lots of vulnerable road actors who could face very serious consequences if either the vehicle doesn’t behave as it should, or if other road actors don’t behave as they should around the autonomous vehicle.

The more that we see innovations in transportation and mobility, the more our personal information becomes a security concern. How do you balance the desire to innovate with those data privacy concerns?

I think the part of bike-sharing that still can be a challenge is data-sharing. And data is about not just transportation information, but personal information – what we can call PII, personally identifiable information. What we need as a culture, as a society, a city, state, is real rules for privacy. We don’t have them right now. And you can look at it at a macro level, we can see a company like Equifax, which took our personal information, with absolutely no permission, from people like you and I, and then they lose that information and put us in jeopardy. And there are no laws requiring them to take any particular care with our information. And there’s no penalties to give them incentive to build into their business the resources needed to take good care of (our information).

Essentially, we need those laws and those penalties to keep companies on the hook?

We need regulation, commonsense regulation. And I use the word rules, because rules can be interpreted a lot of different ways, and there’s lots of different ways of coming about this. But clearly, there’s not enough value being placed in the marketplace on our PII. And that needs to be done. And it shouldn’t be something that every company, every government, should have to do on their own. I really think it needs some sort of national strategy and policy.