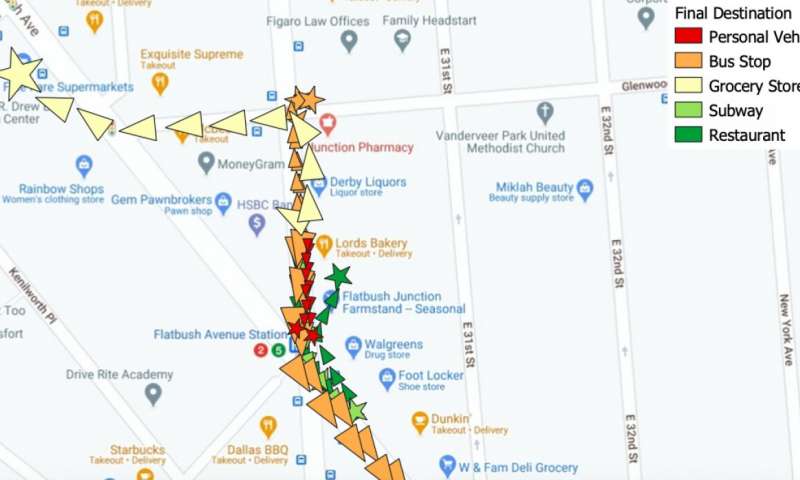 The project, a collaboration between NYU Tandon and the NYU School of Global Public Health, was led by Debra Laefer, a professor of civil and urban engineering at NYU Tandon and director of citizen science at the Center for Urban Science and Progress (CUSP). It aimed to collect hyper-local data from around the city’s medical facilities to aid in the understanding of the role surface vectors and destination choices as means for the global spread of infection.

Employing novel, three-dimensional geospatial methods, as well as two-dimensional virus mapping techniques that date back to 1854, the team captured hyper-local data on movement and behavioral choices of people when leaving high infection COVID-19 medical facilities: they created precisely detailed spatio-temporal records of what people touched, where they went, and whether they were wearing personal protective equipment, thereby identifying surfaces and locations most likely to be disease transmission points (including public transportation and for hire transportation like Uber).

Collectively, the team spent over 1,500 hours recording observations across all hours of the day and days of the week. They collected 5,065 records documenting the behavior of 6,075 individuals around 19 hospitals and urgent care clinics across four of New York City’s five boroughs. Observing subjects from a distance for periods of up to 20 minutes, the researchers documented the gender of the subject, objects touched, route taken, and destinations. Each record also included locational information about the medical facility, the weather, and 61 other attributes related to the demographics of the facility’s zip code. The records show clear trends over time and differences in behavior by gender in both transportation choices and PPE usage. These include a higher PPE usage rate at from the very start and a visible increase in mask wearing after the Governor’s mask mandate.

The researchers, including Thomas Kirschner of NYU Global Health and director of the NYU Mobile Health Lab, discovered that:

The team has made the complete data set available as a resource for scientists building machine learning models to map and analyze the spread of the coronavirus. It is available at NYU’s Spatial Data Repository.

“As soon as COVID-19 started impacting New York, I sought to find a way to use my skills to help further research, and many of our students felt the same way. After receiving the grant from the National Science Foundation, we were quick to organize and start collecting data,” said Laefer. “While it was great to see such a high percentage of people wearing PPE, many were quick to touch their phone or other objects, potentially spreading the virus. We hope this data will help create more accurate virus tracking models and more awareness as to possible transmission routes.”

She added that by releasing this highly detailed data set researchers around the world would have a basis for designing machine learning models that could more quickly forecast disease spread in urban areas based on physical movements, transmission locations, transportation choices, and a pathogen’s characteristics.

“The importance of rapid modeling of disease spread in three dimensions can’t be overstated, as anyone knows who has taken even a cursory look at the spread of contagions like Legionnaire’s disease, or avian flu,” said Laefer. “We are optimistic that the data from this work will betoken new disease transmission models that can radically improve public health decision-making, intervention, and risk communication, all of which need to be fast, accurate, and responsive to the most current data, especially where a global pandemic is concerned.”