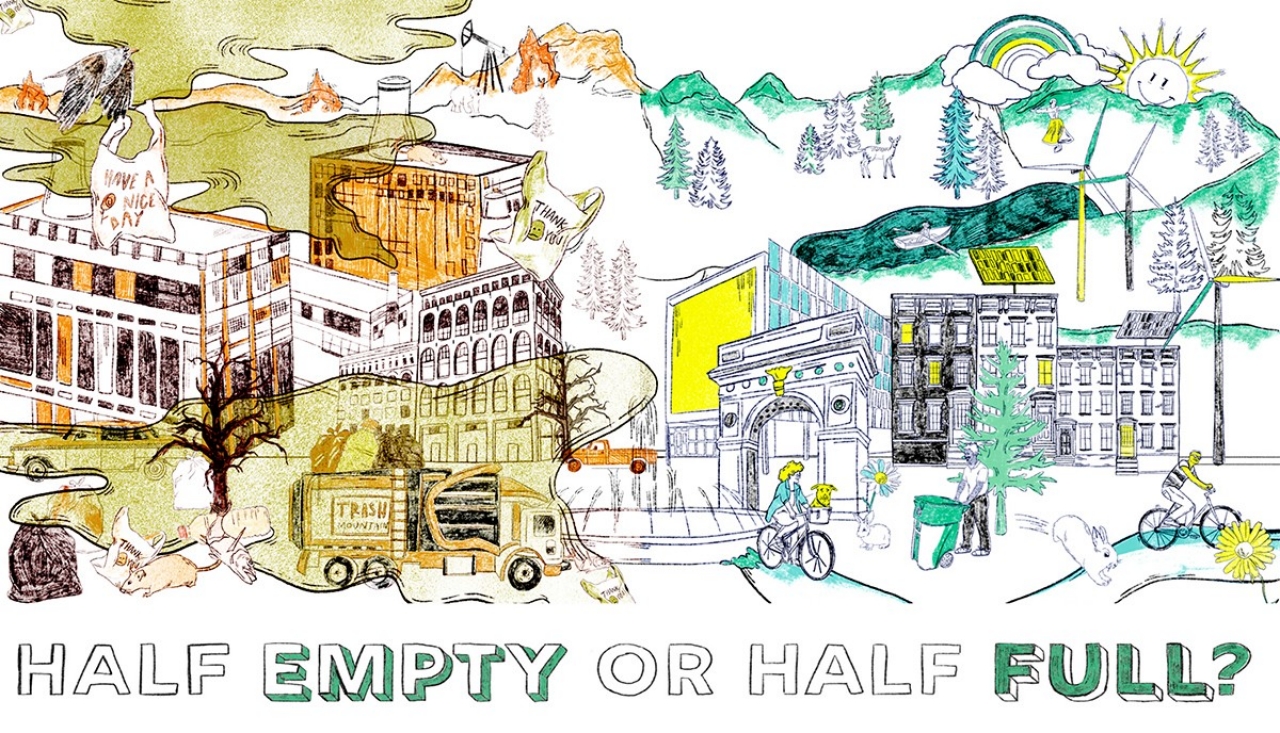 It’s not news—climate change is real—but the matter gets more urgent by the day. Using state-of-the-art tech and cutting-edge measures, NYU is innovating when it comes to saving energy on its campuses and developing sustainable practices to be used everywhere. (Feature story by Andrew Postman, via New York University)

It’s the kind of story that happens in real life every …
No, that’s not right. It happens more like once every …
Oh, who are we kidding? It never happens.
A big institution achieves a massive goal. OK, that occurs sometimes. In less time than agreed upon? Maybe once in a while. But in half the time? Like five years earlier than promised?
Yeah. No. Never.
Yet that’s exactly what NYU accomplished, an exercise in commitment, skill, and efficiency. In 2007, the university promised New York City it would cut carbon emissions by 30 percent in 10 years. Because the vast majority of the school’s energy use comes from its buildings, that meant an extensive analysis and upgrade to structures that needed it. And that was challenging since most of the university’s stock is old and inefficient: at least 60 percent are 60 years old, with many of those more than a century old. The past design of buildings is often not ideal for the present or future.
If you don’t remember reading in 2017—the promised date—about whether NYU had (or hadn’t) reached the promised goal, that’s because it was old news. They’d already done so.
In 2012. Half the time.
“We want to do our part, and our community wants us to do our part, to address the problem,” says Cecil Scheib, NYU’s assistant vice president for sustainability. He returned to the university in 2018 after six years at the Building Resiliency Task Force for the City of New York and the Urban Green Council; before that, from 2007 to 2012, Scheib was NYU’s director of energy and sustainability.
While it’s heartening to know that the will, skill, and execution were there to achieve the lofty emission–cutting goal, what makes it exciting is how quickly the fixes paid for themselves. There was a one- to four-year payback, with much of that coming from efficiency improvements in buildings, including the switch from oil to gas. In the five years it took to reach the goal, the university saved approximately $30 million on energy; each year since, it has saved about $15 million. “The business case is incredible,” Scheib says.
The university is pursuing similar improvements on so many levels (through academics, enterprises led by faculty, campus-wide initiatives) and from so many stakeholders (students, faculty, staff, provost, the Office of Sustainability, the President’s Office). Indeed, the efforts are so abundant—more than 900 sustainability-related courses; 120 Green Grants awarded since 2007, with almost four of every five institutionalized; NYU’s new hub for media, technology, and the arts at 370 Jay Street being recognized with LEED Platinum certification—it might almost be easier to identify who around campus is not involved.
The Department of Environmental Studies recently launched the Center for Environmental and Animal Protection, a research unit that examines the nexus of animal agriculture and climate change. The Frank J. Guarini Center on Environmental, Energy, and Land Use Law at the School of Law offers programs that are open to the public and provides cutting-edge analysis on such innovative citywide initiatives as building credit-trading programs (i.e., if you and I both have to cut x amount of energy from our buildings, but I can do so at a lower cost than you can, then let me make my cuts and yours, and you pay me). The College for Global Public Health offers a concentration in environmental public health sciences, which teaches ways to develop scalable, sustainable solutions to ecological challenges (students study, among other things, the effects of exposures to chemical and physical agents). Stern’s Center for Sustainable Business, which looks at questions like how companies can survive and thrive in an increasingly resource-deprived world, and what is the return on investment for sustainability, has recently expanded its faculty. The Tandon School of Engineering offers a bachelor’s degree in sustainable urban environments.

Then there’s the university’s Center for Urban Science and Progress, which has aided the city’s efforts in becoming a leader in climate policy. A decade ago, the city passed groundbreaking laws requiring buildings to report their energy use; associate professor of urban science and planning Constantine Kontokosta has been a leader in analyzing the data generated, which helped to create sound policy. One of the most exciting recent developments: New York City is now considering (and expected to pass in 2019) legislation that would require buildings to reduce their emissions—a directive that no other city in the world is known to have instituted.